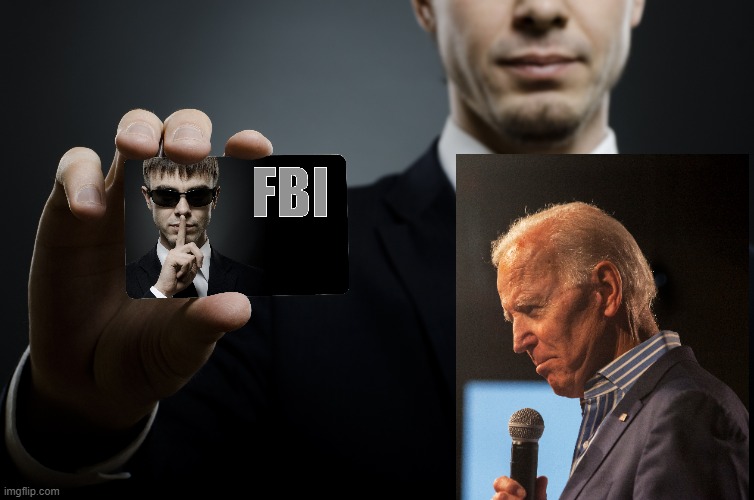 Relations between Team Biden and the FBI soured over the past weekend due to a Delaware snafu.

The FBI, you see, recently decided to drop a few entrapment schemes after the Whitmer one didn’t work out the way it intended, so it had time to actually start looking into crimes rather than just ignoring whatever real criminals were doing and setting MAGA patriots up instead.

So, with its newfound time, it decided to investigate reports of a creepy old man sniffing children and swimming in the nude, reports supposedly called in by Delaware residents.

It took weeks of careful investigation by the best team of fully diverse agents the FBI could find (which wasn’t that great of a team, as the deaf and blind team members had a hard time contributing), but finally the agents thought they had a case made.

They had, through hundreds of photos, hours of video, and many minutes of recordings, made quite the case against the suspect and were ready to pick him up.

Something nagged at the head of the FBI’s Delaware field office, however. To him, the guy in the photos looked vaguely familiar, though he couldn’t place why. Plus, the tendency of the man to be in the nude made it hard to examine the photos closely, as no one wants to see a nude octagenarian.

So, the head honcho signed off on the project and ordered the FBI’s tactical team to swoop in and grab the suspect at the first opportunity, which they did the next time he decided to go bathing in the nude.

Thinking he was a drug dealer of some sort, or, worse, another Epstein, they knocked out his surprisingly large contingent of security guards out and handcuffed the confused old man, who kept mumbling that his wife was a doctor and could sort everything out.

Ignoring that, they tossed him in jail and had a few drinks to celebrate the successful raid.

That’s when they looked up and saw the news, which was reporting that a team had kidnapped the president while he swam in his pool and that a manhunt was on.

And that’s when they realized what had gone wrong and why the target looked so familiar: they had arrested Slow Joe!

His release was quickly sorted out, though the FBI insisted that whatever he was doing was weird and needed to stop, particularly the sniffing the kids part.

Joe just wandered away while “Dr.” Jill asked for the manager and then started screaming at him.

Trump, later calling in to Hannity to joke about the incident, said:

“You know, I always thought it would be Hillary or Hunter that the FBI sent a tactical team to pick up, not Slow Joe. Sure, he’s corrupt, but he’s senile? We all know he’s not a mastermind, he doesn’t even have a mind.

“Anyway, I’m sure those Secret Service agents were glad they got the day off from having to watch him swim around in the nude!”