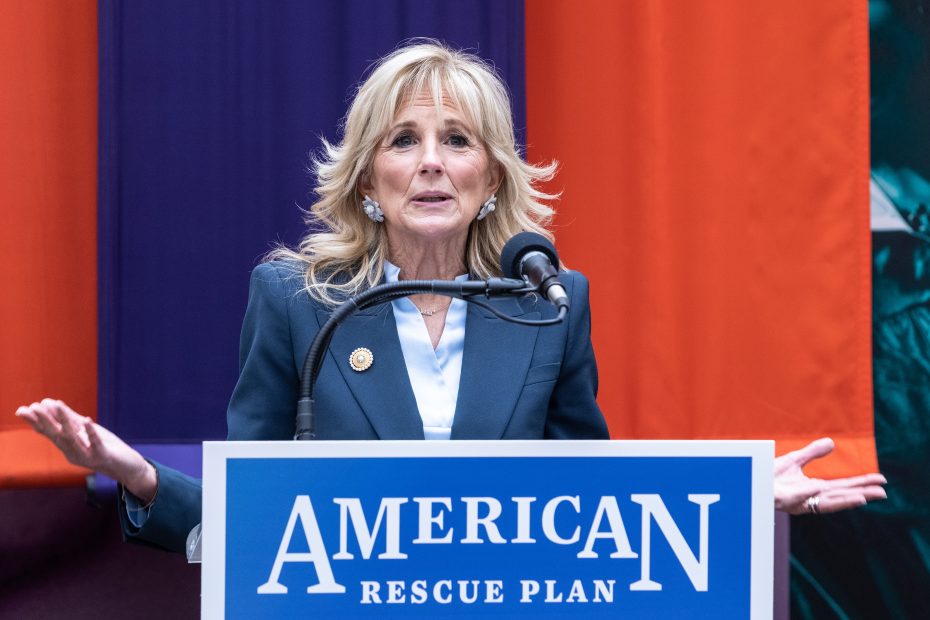 You know you’re hearing from Dr. Jill when you hear a woman giving a speech so bland, dumb, and evident of vapidity that you would think Kamala Harris is the one giving it but there’s no telltale cackle to alert you to cackling Kamala’s presence. Such was obvious yet again in a recent speech that Dr. Jill gave in Mexico. Speaking about “empowered women,” Dr. Jill said that such women power economies in the blandest terms imaginable. In her words:

¡Buenos Dias! Thank you all for joining us today. Meeting women like all of you is so inspiring to me, and that’s why it’s important to lift up your stories—so that they can inspire others as well.

So, I’m honored to be here. From soft lullabies to battle cries for justice, women nurse and nurture, teach and build, lead and dream our world forward—each and every day. We have never been silent. But women have been silenced.

For many women around the world, simply raising their voice is a struggle. They’ve had to fight for a seat at the table. When women are left behind or pushed out, it hurts us all. But when women get the opportunities that they deserve? There’s no limit to what they can do.

When they earn money, they invest it in their families. They create more economic growth.  When women have the ability to participate fully in society, they create more stable and peaceful places to live.

Our jobs are not just a pay check—they give us a sense of purpose and pride. Being First Lady of the United States is the honor of my lifetime. But when I took on this role, I knew I couldn’t give up the career I had worked so hard to build. So I do what women do – I do both! Teaching isn’t just what I do—it’s a part of who I am.

Empowered women power our economies. They are the heart of a strong democracy. And that’s why I’m so excited to be here with all of you today.

Well, the cartels took to mocking Dr. Jill’s pronouncement near immediately. Speaking with derision on social media, the Sinaloa Cartel Twitter account said: “Power our economies? What? No way, Jose. The Mexican economy is powered by us, the cartels, and there are no empowered women here. The only industry even close is the hospitality industry, but those women paid like a dollar a day to clean up after messy tourists aren’t really empowered. Jill must be retarded or something.”

Similarly, the Knights Templar Twitter said that Dr. Jill’s speech was “an attempt by a Yankee imperialist to destroy traditional society in Mexico” and would “be treated with the derision and anger which is due it.” They then posted an animated video of them shooting down Air Force 1, on which Dr. Jill was traveling, with the caption “still feeling empowered, esse?”

Dr. Jill refused to respond to the criticism other than saying that it was “misogynistic nonsense pushed by reactionary terrorists.”

The cartel and Taliban Twitter accounts, bonding over the criticism directed their way by the mainstream media over their mocking of “empowered” American women, then made jokes that they had “defeated the Pantsuit Empire” by “winning both the war on terror and the war on drugs.”