“Another One This Month”: No One Surprised When Clinton Lawyer Disappears after Day 3 of Trial, Found Dead on Beach Two Days Later 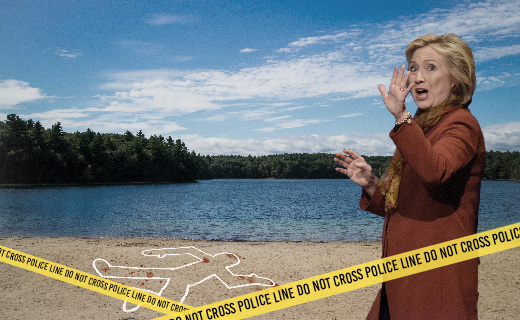 Michael Sussmann made the mistake of working as a lawyer for the Clinton Campaign. That put him in close proximity to the Clintons, a couple who have a suspicious number of “friends” turn up dead after saying they’ll testify about what the Clintons are up to.

Yet worse, Mike decided to do sketchy things for the Clintons which, though it put him in Killary’s good graces, was a bad idea in that it meant he’d be in the very, very dangerous position of likely having to testify about what Hillary was up to.

So, no one was surprised when, after day three of his trial, a day on which he pointed at Hillary and shouted “She did it your honor! She ordered me to set up Trump! Yes, I did it Obviously I did t. That’s obvious. But only because that woman made me do it!”

Needless to say, Hillary was not happy with mike doing the millenial thing and “speaking his truth” on what went down with the Russiagate hoax in 2016. In fact, she was furious and, red-faced, stormed out of the courtroom, plotting her revenge on Sussmann.

She didn’t have long to wait. The judge let Michael out on bail shortly after that outburst, knowing that Hillary would “arrange a meeting” with him if he didn’t give her a chance to strike.

So, knowing that he was signing Sussmann’s death warrant when he did so, the judge let him out on bail and wished him godspeed.

Sussmann, not realizing the danger he was in because he thought Hillary “owed him one,” left the courthouse blissfully unaware of the imminence of his demise.

Within one block, a van pulled up next to him and he was tossed into it by black-clad thugs. A devilish cackle could be heard from inside the van as it sped off. That was the last time Sussmann was seen alive.

Two days later, Sussmann’s body was found on the beach near a Clinton property in South Florida. Five pairs of footsteps were leading away from the body (four of men’s military-style boots and one pair of prints that looked like high-heels), Sussmann had two gunshots in the back of his head, and his hands were zip-tied behind his back. It was ruled a suicide within minutes of its discovery.

The local police chief, the same guy that refused to look into accusations about what Epstein was up to, said:

“We know this looks sketchy, but what happened here is obvious. Mike was having a good time after his trial and decided to get into some freaky stuff with a lady of the night on the beach. While they were going crazy, her pimp and three of his friends showed up and escorted him away. That left Mike with his hands zip-tied on the beach. He then tried using his handgun to shoot off the zip tie, but accidentally shot himself in the back of the head. Easy as that.”

Hillary could not be reached for comment, but a cool white van did just pull up outside our office building.