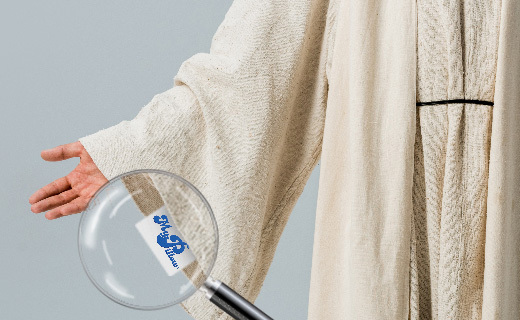 Recently found shreds of a cloak believed to have been worn by Jesus during the events described in the New Testament have been found in an abandoned Knights Templar redoubt buried deep in the hills of Judaea.

Apparently, a team of researchers and archaeologists used an old map that they found in a medieval castle in Toulon, a castle once owned by a Grand Master in the Knights Templar, to find the cave fastness and enter it.

Inside, they found a variety of historical treasures dating from the Classical and Medieval Eras, including a full suit of armor worn by a Norman knight fighting in the Third Crusade, three skeletons of warhorses that have shed new light on the sort of horse used by knights at the time, a splinter of what’s believed to be the True Cross, piles of armor and weaponry preserved from the Roman Empire under Titus, and, best of all, a shred of cloth with an inscription reading “the robe of our Lord, Luke 8:40-48” chiseled into the face of the rock above it.

Luke 8:40-48 is the passage where a woman afflicted with bleeding touches the hem of Jesus’ robe and is healed, with the inscription implying that it is the robe from that story.

Because the room of the redoubt had been sealed by a boulder and an airtight rim of mud had formed around it, making it airtight, all the artifacts were well preserved.

Examining the fibers of the garment, researchers were shocked to discover that it was composed of precisely the same material as MyPillow’s Giza Dream sheets, made as they are of 100% Egyptian cotton.

Writing on that in a report following a thorough analysis of the robe, head researcher Danika Theslin said:

“This discovery is groundbreaking for a number of reasons. First off, it implies that cotton was somehow grown in Egypt during the Augustan period, and that while the region was known for its linen, cotton must also have been a material grown in the fertile regions around the Nile. We are not sure why it died out, how it got there, or why no other Egyptian cotton existed until the British began planting it there as a substitute during the American Civil War, but the discovery is shocking for that reason alone.

“Beyond that, it’s amazing that the robe is composed as the exact same fibers in the exact same length and thread count per square inch as used in MyPillow Giza Dream sheets. Jesus must have been quite comfortable when walking around, no wonder that woman wanted to touch the hem of his garment!”

Mike Lindell posted on Truth Social about the discovery shortly after the report was released, saying that he was proud that both Christ and Trump enjoyed Giza Dream Sheet material and that the continued use and relevance of Egyptian cotton was a testament to the comfort provided by the 100% natural fibers.