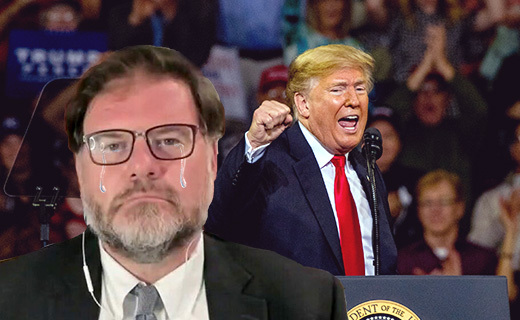 Though Trump gave the glory for his recent wins to God during a recent rally in Illinois, many others on the right, particularly the MAGA right, have attributed the victory to him.

As they see it, it’s only because Trump did so well in fighting against Killary in the 2016 election and won the presidency for 2017-20121 that the GOP was able to install three new conservative justices, and only because of Trump’s strength that the justices were such good picks.

But, while many on the right are happy with that, joyous both with Trump’s victory and the results of the recent SCOTUS decision, not everyone who is supposedly on the right is so happy with what’s happened.

Namely, the RINO grifters who have pretended to be Republicans for years while agitating and fundraising by claiming that they want to get rid of Roe, end the abortion regime, and protect gun rights are very unhappy that Trump’s victory and court picks have resulted in that actually happening.

One such unhappy RINO is American Enterprise Institute personality, CNN talking head, and unread columnist Jonah Goldberg, a noted Trump critic who pretends to be conservative while rubbing elbows with the left and attacking the right.

He was seen in D.C. sobbing inconsolably on the side of the road following the announcement of the Dobbs win, with a video of him crying while smoking a cigar (because he’s a ‘REAL MAN’ like the other Con., Inc. grifters) in his car emerging. In it, he can be heard saying, while crying to himself:

“I just can’t believe that Trump actually had a big win and that he’s responsible! I was supposed to be part of this, my friends were supposed to do it! We were supposed to win with facts and logic and very important policy studies and polling, but he did it just by joking on Twitter and not surrendering to the left! It makes no sense, I want it to end!”

He then went back to crying uncontrollably, with little else being decipherable other than his continued screaming of Trump’s name while pounding the steering wheel.

Similarly, Liz Cheney was seen having a total breakdown in Congress, holding hands with her new Democrat friends and weeping, though she wasn’t upset with the end of Roe, like her Democrat friends, and was instead crying at the idea of a Trump victory.

There were many other such cases, with nearly everyone from Bill Kristol to Adam Kinzinger on the anti-Trump right seen crying over the idea that Trump won and that it was the “bad orange man” who was responsible for their courtroom victory, something that they found utterly horrible and beyond their worst nightmares.

Trump mocked all of them on Truth Social, saying “Sorry losers and haters, but I won totally and you all know it!”