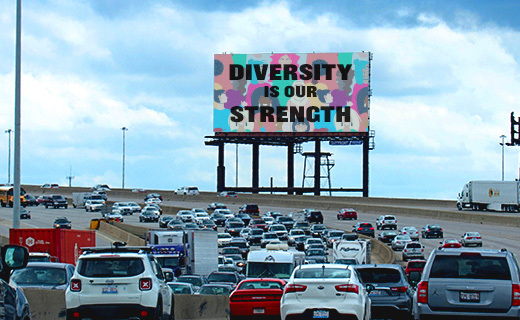 Desperate to stop the Chicago crime problem from getting worse now that Citadel, an investment group, has ditched the city for Florida, Lori Lightfoot has resorted to what many describe as a “last-ditch strategy”: putting up billboards proclaiming “diversity is our strength” in areas most hard hit by the new wave of lawlessness and violence.

Discussing the initiative near one of the billboards installed near a recently looted and burned Gucci store in the once-beautiful and ritzy Magnificent Mile, an area that used to be Chicago’s premier commercial district but is now an area filled with a few luxury stores bleeding from continued lootings, robberies, and nearby murders (mostly stemming from disputes over the recently stolen merchandise), Mayor Lightfoot said:

“Look, what we really need to fix Chicago isn’t more cops, isn’t more policing, isn’t even more money. More money, more problems, as the saying goes.  We don’t need any of that. Instead, we need understanding. Understanding that activities once called criminal are really the result of inequity, privilege, and our racist path. Understanding about different cultural norms. Understanding that diversity is our strength.

“And so we’re installing these billboards to remind everyone, both the shop owners who have suffered some regrettable losses due to misunderstandings and the individuals who are claiming their reparations by not paying for certain items of merchandise, that it’s our diversity that makes us stronger and better.”

The mayor then had to leave, as a cacophony of gun shots rang out as rival gangs fought over the spoils of the last luxury jeweler along Magnificent Mile, firing at each other with long bursts from black market AK-47s and Mac-11s and destroying much of the stolen merchandise in the process.

She could be heard yelling “racism is to blame for that” while running from the gunfire, 99% of which came from 18 to 24-year-old black men.

Local business owners were furious with the new strategy.

“Seriously?” the manager of a local Hermes establishment asked, “We’re supposed to just ignore all the burning, looting, and murdering, or as I like to call it ‘BLM’ and just pretend that being ‘understanding’ is the way out of this? Heck no!”

Another commented that the building of the “diversity billboard”, as it has become widely known, over a burned out husk of a store on Magnificent Mile was like “the Islamists building mosques near the locations of victories, only without a victory for anyone other than crazy people.”

A local gangbanger derided the billboards too, saying “heck, this might make people mad enough to start demanding we be locked up…I’d say it was a bad move. Plus the message is stupid and everyone knows it; if it were true, they wouldn’t need government-funded billboards.”

Many agreed, with local business owners and the local gangs presented a joint demand for the billboards to be taken down, something which Mayor Lightfoot refused to do.

And so the store owners and gangbangers joined forces to just ignore the law, as has been happening across Chicago for years, and burn down the ridiculous billboards, joining forces against the hated government propaganda.

So maybe the billboards did lead to unity after all…