Clarence Thomas Finds Biden “Too Dumb to Be President”, Orders Him Removed from Office 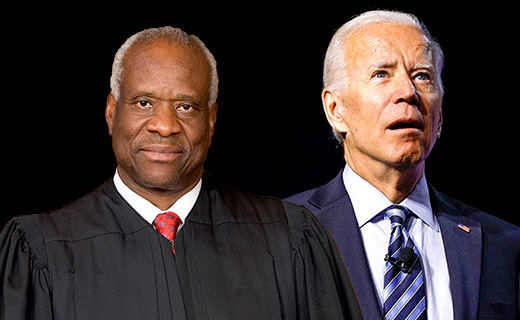 Following up on the massive slew of courtroom victories last week, Justice Clarence Thomas fired off another absolute winner of a decision to kick off this week, ruling that Joe Biden was “so senile it was hard to believe he could even eat oatmeal” and “too dumb to be president”, and so would have to be removed from office.

Discussing the issue and remedy in that decision for the case All of America vs. the Senile Moron in Charge, Clarence Thomas wrote:

“Frankly, we just can’t let this ignoramus and idiot run things any more. He’s too dumb to be president, too senile to be trusted with the nuclear buttton. Heck, we’re convinced, after looking at charts of his brain activity, that he’s simply so senile it [is] hard to believe he could even eat oatmeal without a serious helping of help.

“And so we rule that he must be removed from office. America needs someone competent and able to read and speak without help in charge, not Mr. Biden and his two or so brain cells.”

However, the justices realized that their decision posed a problem: if Biden was booted from office and no other guidance was given, then Kamala would be president, which seemed equally bad.

And so Thomas addressed that too, ruling that:

“While Biden must be removed, we find it unjust to force a bad president, indeed a very, very bad one, on the American people. He might not be great, but neither is Kamala, who is somehow even more disliked than he is.

“So, to fix this, we are ordering a redo of the 2020 election. The Republicans can choose whoever they want and the Democrats can choose whoever they want, and we’ll just redo things this November so that America can find a president who has more than two or three brain cells to rub together to run it. Even if unorthodox, that seems far better than letting Biden ruin the economy or push us into a disastrous war with Russia.

“In reflection of the limited time available, this president’s term will only be two years and will not count as a full term. The parties can handle the primary processes as they see fit.”

The swell of anti-Biden, pro-SCOTUS emotion following the announcement was stunning, with many joking that a vote didn’t even need to be held, Trump or DeSantis could just take the job. The two are reportedly working out a compromise, with Trump perhaps handling the next two years and then DeSantis taking over in 2024.