FBI Announces It’s Too Busy to Investigate Epstein Associates, Hunter Because Trump Is a Threat to “Our Democracy” 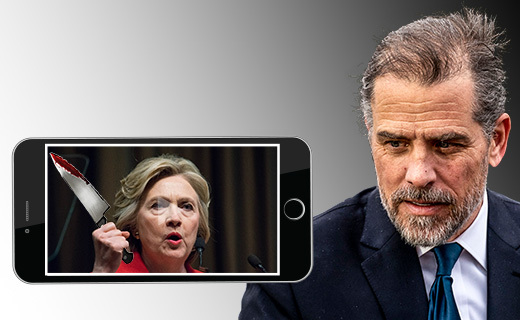 Why hasn’t the FBI looked into Epstein’s associates, the dozens of people that flew to his private island to do unspeakable things to and with young girls?

Many suspected that it hasn’t done so because of either it being compromised by people close to Epstein and so not wanting to look into the issue or because Epstein was actually an agent of an intelligence service, most likely Mossad or Israeli Military Intelligence (the father his lover Ghislaine Maxwell, Robert Maxwell, was a well-known Israeli agent and arms smuggler before his suspicious suicide while on a yacht, much like Epstein’s mysterious death).

While those theories could very well be true, particularly the one that Epstein was an Israeli intelligence asset, it turns out that there’s another reason the FBI is giving, at least publicly: the bad orange man is a bad orange man that needs to be locked up before it does anything else, including going after child abusers and molesters.

Christopher Wray, the director of the FBI, announced that in a statement, saying:

“What America faces right now is the greatest threat to our democracy seen ever, or at least since the War of the Rebellion (by which he presumably meant the US Civil War). Thanks to the antics of that evil man, former President Trump, and his cult-like following, America is under attack.

“Not only is Trump mean, the sort of person to make very uncouth remarks about certain liberal politicians on Twitter before he was kicked off, something I fully supported at the time, he also encouraged people to protest peacefully and patriotically!

“Such cannot be allowed in America! This is the land not of peaceful and patriotic protest but of BLM being able to do whatever it wants as everyone else has to sit by quietly and watch. That’s what America is, and what it certainly will continue to be under my watch.

“And so we must protect our democracy. No asset can be wasted, no resource left unused, as we work to bring him down and ensure that the US can never let that evil orange man be president again.

“What that means is redirecting resources. Epstein’s associates will be left uninvestigated, Hunter Biden won’t be poked or prodded, and we’ll unfortunately have to let CCP spies roam free. Trump is just too much of a threat, too much of a danger to our democracy, for anything else to be the case.

“I know that might strike some as absurd and anger others, but it’s what we have to do as we strike down Biden’s political opponent…err, the bad orange man that’s a threat to our democracy.”

Wray was widely mocked on Twitter after the announcement, but many of those who mocked him later disappeared or saw their accounts on Twitter.