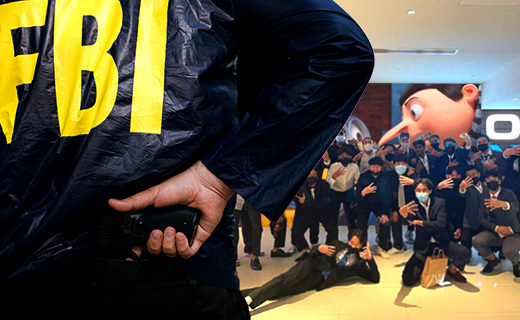 A recent trend taking the Internet by storm is the “#Gentleminions” trend, which encourages young men to show up to movie theaters dressed in suits to watch the newly released Minions: The Rise of Gru movie. As the New York Post reported:

The self-proclaimed “Gentleminions” wear formal suits and go to the movie screening in large groups and cheer loudly as it begins to play. The actions of these teens are purposefully taken from the movie’s super-villain Gru, including the suit and copying his hand motions throughout the movie.

Unsurprisingly, the collections of teens doing so tend to be a bit rowdy and out of control, something disliked both by the movie theaters they attend and the other viewers of the films, most of whom are there with young children.

And so movie theaters have started to ban young men dressed in suits from watching the movie, claiming that the “#gentleminions” trend has gotten too out of control (that’s real, read about it here). One theater, for example, said “Due to recent disturbances following the #gentleminions trend, any group of guests in formal attire will be refused entry for showing of ‘Minions: The Rise of Gru.’ Thank you.”

Well, Nasty Nancy Pelosi has latched onto the issue and used it to persecute the “instigators” of another “insurrection”, accusing the suit-wearing teams of “attempting to subvert our movie going experience.” Nancy, unsurprisingly, is one of the investors in the film and so wants to see it do well, which won’t happen if suit-clad thrill seekers scare away families.

And Pelosi isn’t the only one. Wyoming Rep. Liz Cheney has taken a break from attacking Trump over the January 6th “insurrection” and is now using her power and platform to go after those participating in the “#gentleminions” trend, declaring it the “worst attack on our nation’s moviegoing experience since the Star Wars sequels proved to be a major disappointment and 3D theaters stopped handing out those cool red and blue glasses that were fun to take home and wear to costume parties.”

She then apparently used her father’s national security contacts to get the FBI to start investigating everyone who has posted a “#gentleminions” tweet or TikTok in recent days, with the full “eye of Sauron” of the national security establishment being directed at Zoomers in suits taking bananas to theaters.

Though the FBI has so far avoided releasing a statement on the matter, rumor in DC has it that the FBI, NSA, and CIA are preparing to declare the “#gentleminions” trend a “Russian influence operation” and all those who wear the suits to the movie “domestic terrorists” or Russian agents.

Trump wore a suit to the movie with his sons Don Jr. and Eric, giving the FBI another avenue by which it can persecute him.