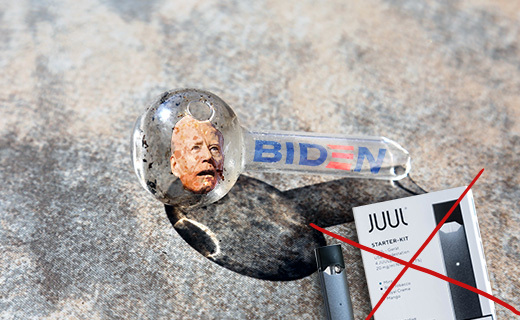 Following up on its decision to open the border up as wide as possible and let whatever and whoever wants to flow across to do so, Team Biden has decided to “improve health outcomes” for “narcotics using individuals in inner city communities” by providing “safe, clean, and free crack pipes” to those communities.

Speaking on that, some random staffer that Team Brandon trotted out to speak about the policy and then disappear back into the ether and hidden folds of power so that its main spokespeople weren’t negatively affected by the announcement, said:

“Today, Team Biden has taken a huge step forward in advancing positive health outcomes in a cost effective way for those narcotics using individuals in America’s wonderful, diverse, vibrant, and strong inner city communities. That step forward is the provision of supplies that make narcotics use safer and more enjoyable for those individuals.

“Moving forward, we, in partnership with local community leaders, NGOs, and aid workers, will be providing all those materials needed to keep narcotics use safe. Clean, new needles will be provided along with containers to safely collect and dispose of used ones, for example. Additionally, we will be handing out safe, clean, and free crack pipes to anyone who might want one.

“This program will be developed and managed by Hunter Biden, who hopes to use his experience with these narcotics to make use of them safer and more pleasant for all involved.”

Though crack, heroin, and meth users generally cheered the announcement and were relieved that they could spend more of their money on drugs rather than the materials necessary to use drugs, certain “community leaders” and “civil rights activists” tore into team Biden for daring to focus the program on inner city communities.

In the view of those leaders and activists, the program was “racist” because it was focused on providing drug use supplies to mainly black people.

And so the protests began, with the needle and crack pipe provision centers burned down by crackheads upset that whites weren’t also being targeted by the program.

Further, the fact that most of the protesters looted the pipes and needles and then used them to use drugs weakened the messaging coming from the protests.