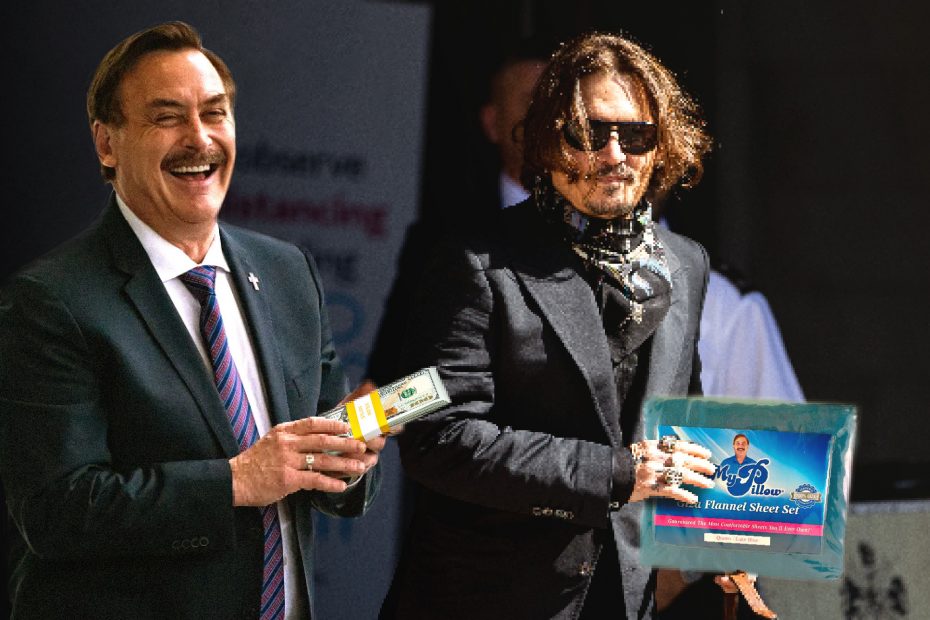 During a now-infamous moment in the Amber Heard and Johnny Depp trial, it came out that Ms. Heard had, at one point, pooped in Johnny Depp’s bed, or at least that Mr. Depp blamed her for a pile of “human fecal matter” found on his side of the bed.

“I had received some news,” Depp said. “I was shown a picture of what the problem was. I had gone to Mr. Bett and said, ‘She’s at Coachella. I think it’s a good time to go downtown so that I can get some of my things and get them out of there,’ especially things that were precious to me… and he said, ‘I don’t think now’s a good time to go.’ And I thought, ‘It’s the perfect time. She’s not going to be home for two days.’ Then he showed me a photograph on his telephone of… it was a photograph of our bed, and on my side of the bed, was human fecal matter.”

Fortunately, Mike Lindell, ever on the lookout to hawk his amazing MyPillow products, sensed an opportunity to swoop in to the rescue and get Johnny some new sheets to replace the ones that were soiled with nightsoil.

Announcing that during an episode of Steve Bannon’s “Pandemic War Room” podcats, a show on which the MyPillow CEO frequently appears, Mike said that would be happy to replace Mr. Depp’s sheets with some MyPillow Giza dream sheets, which he assured Mr. Depp were better than anything else he could find on the market. Speaking on that during the podcast appearance, Mr. Lindell said:

“Look, Johnny, so your sheets were ruined and you need new ones, so you’re probably shopping around and looking for the best on the market. Luckily I have them for you, and assuming you’re willing to start posting your own “JCKSPRRW” MyPillow code on Twitter, I’d be happy to send you the best sheets on the market, MyPillow’s Giza Dream Sheets, for free.

“They’re made out of 100% long staple cotton, the thread count is higher than you ever were when typing out some of those texts read out during the trial, and they’re sheets so comfortable that even the Royal Governor in Port Royal would have been comfortable in them.

“What’s better, with the promo code you can get two sets for the price of one, so if any ‘accidents’ happen again, you won’t even need to order a new set! Now who could turn that down?”

Johnny accepted the offer, shockingly, and posted about the experience on Twitter, saying:

“I thought these would be sheets only fit for the sails of the Black Pearl, but it turns out they’re sheets more comfortable than any in Port Royal and cheaper than any rum in Tortuga when you use code JCKSPRRW at checkout!”