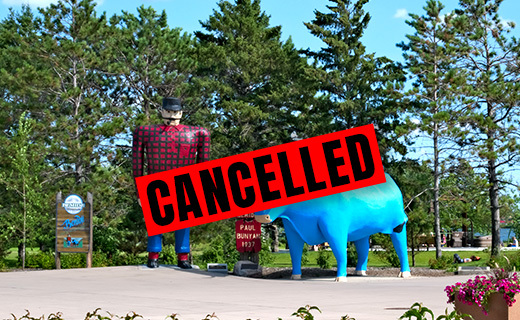 It’s Paul Bunyan day and so the left is of course doing to him and his memory what they did to Christopher Columbus, canceling him and his memory in the name of better-reflecting values that (for them) have changed dramatically since the days of old.

For those who don’t remember, Paul Bunyan is a myth of a super human lumberjack that traveled with a blue ox, chopping trees across the American (or Canadian, depending on the legend) forests of the frontier. His is a classic myth, one of great human strength and overcoming nature.

And so the left is trying to cancel Bunyan, as it hates that his memory is preserved in a positive way despite his having chopped down trees.

“I’ll just put this simply and use small words so that even you Neanderthal-like, Trump-loving deplorables out there can understand it: it’s time to cancel Pual Bunyan.

“Why? That’s simple. Pual chopped down trees with that massive ax of his, at least according to the legend, and so committed a climate crime the like of which we find reprehensible.

“Trees are living things too! They share nutrients, communicate, do much of what humans do other than moving around. They store carbon for us, saving us from some of our worst CO2 emission excesses, and are our best friends! Trees must be protected from the axes of evil men like Paul Bunyan, not chopped down by those who have no respect for the climate or mother Earth.”

Her speech was received with raucous applause and a smattering of jazz hands from the few dozen members of the crowd, all of whom looked tired, angry, and undernourished.

Greta the Climate-Focused Swede then appeared on stage and simply yelled “We must save the trees, blah blah blah” before stomping off the stage in evident frustration at the idea that people still loved the memory of a man who chopped down trees.

Felderhoff’s group also unveiled something they called the “Bunyan spike”, a long spike that they plan on hammering into trees to stop lumberjacks, as a chainsaw hitting it would create splinters that could potentially wound or kill the chainsaw-wielding lumberjack.

What makes the Bunyan spikes even more dangerous than traditional spikes used by climate crazies to kill lumberjacks is that they’re made of a super-strong yet non-metallic material, so nothing can be done to detect them ahead of time.

Felderhoff, explaining why many in her groups used the spikes, said “they feel, and not without good reason, that we should kill those who kill the trees. Not that I’m advocating violence…but many find it necessary to protect the trees.”

Non-crazy people, though many don’t remember Paul Bunyan Day, find Felderhoff and her murderous groups reprehensible, so it seems unlikely that Paul Bunyan Day will be officially canceled.