Raging Leftists Kill Cops Instead of Babies in Post-Dobbs Riots 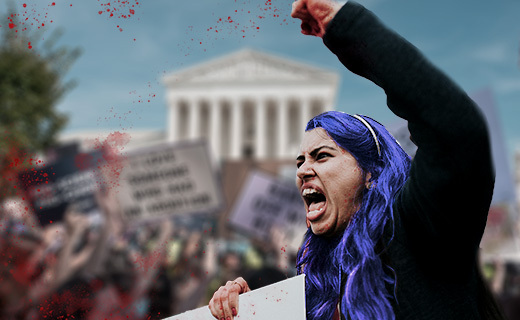 Well the Supreme Court finally did it: the conservative majority did what conservatives have been promising to do for decades and overturned Roe and Casey, finding that there is no fundamental right to abortion and thus that the issue should return to the states, which will decide if abortion is allowed in their borders.

Leftists, predictably, went beyond berserk, with the “burning, looting, and murdering” that happened during the 2020-21 BLM riots happening again but with all the more intensity as raging leftists went wild in the streets, furious that they could no longer kill babies.

Some even brought machetes, firebombs, and firearms, using those weapons to kill cops and innocent bystanders since the Supreme Court had ruled that babies are now off limits.

One “mostly peaceful protester”, back to picketing after having tossed a Molotov cocktail into a local police department building, had this to say about the day of rage following Dobbs:

“Well, sheesh, my woman can’t kill babies no more. What’m I supposed to do, wear a condom? Not get her pregnant? Hell no. That sure ain’t gonna happen.

“So we’re out here protesting for our rights to kill any baby I accidentally create; we don’t want those in our house, so we’re teaching the government who’s who.

“And if that means killin cops rather than babies, or doin whatever else the NYT hints that we need to do on Twitter, well then I’m all in on because I ain’t wearin no condom.”

Words of wisdom from Darnell Wilson, 24.

Women were involved in the fiery but mostly peaceful protests too, smashing traditional gender roles by using stools, bricks, trashcans, and other heavy objects to smash plate glass windows that their male friends could then toss firebombs into and burn down.

Funnily enough, the uniformed protesters were mostly raging against the system in blue states, which under the framework described in Dobbs will be able to preserve access to abortions if they so desire.

So, though abortion will likely be severely curtailed if not done away with wholesale in red states like Alabama and Mississippi, the blue states currently being set alight by people like Darnell and his friends will, if anything, be easier to get an abortion in than before.

But, as usual, protesters can’t be expected to have any idea what’s actually going on, so the crowds continued to go crazy despite it not really making sense what they were protesting against. Classic.

The police, meanwhile, decided to just give up and go home, figuring that their cities could deal with the consequences of spitting on police and threatening to defund them for two years.

That move dramatically limited police casualties, but also meant that there was no one left to protect the cities from the violent but mostly peaceful protesters.