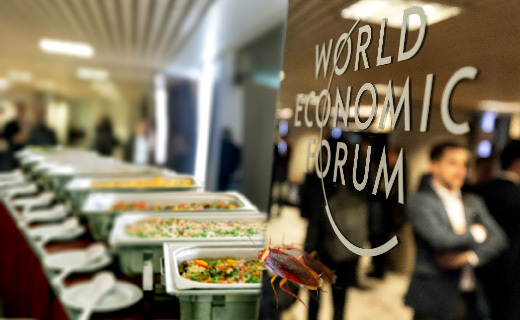 Klaus Schwab and the World Economic Forum want you to “eat ze bugs”, as they see insects as a more sustainable and environment-friendly form of protein and sustenance than beef, chicken, or pork, all of which they describe as “terrible” for the environment.

And so, to try and make their dream of bug-based diets a reality, Klaus and his friends at the WEF sunk billions into “EZB Catering” (EZB standing for eat ze bugs), which was meant to be a globe-spanning catering service that delivers vegetable oil-fried bugs to any location on Earth for a low, WEF-subsidized price meant to entice people into eating bugs.

Unfortunately for Schwab and the WEF, however, no one wanted to buy fried bugs, particularly for events that they were catering.

Even in famine-stricken nations in Africa like Mali, Sudan, and Somalia, the bug meal service had few takers, with nearly no one spending their precious dollars on even highly subsidized cockroaches or grasshoppers.

Furious, Klaus ordered the WEF to make the service free, hoping that people would try it as a novelty and then get hooked on the bugs, which he insists are delicious.

Meanwhile, he and the WEF also sunk billions more into globe-spanning “Eat Ze Bugs” marketing materials, including “Cockroaches: they’re what’s for dinner” TV commercials, “try our mosquito soup” billboards, and “get your free grasshopper puree!” Facebook ads, none of which paid off to any degree.

In fact, most cities with the service had zero takers, spending millions each day sourcing and frying bugs and then having to throw them out or use them as animal feed the next day.

It was an immense drain on the WEF’s treasury, which, though large, wasn’t large enough to continue covering the immense investment. And so, like CNN+, the bug-based catering service has closed up shop mere weeks after opening, only having shipped 2,000 bug meals despite having produced about 170 billion of them.

Klaus, speaking with disappointment after “EZB Catering” had to close up its 15,000, world-spanning shops, said:

“Obviously we are very displeased that you all did not want to eat ze bugs. They are delicious, healthy, sustainable alternatives to meat! Who would prefer a beef patty, with all the attendant emissions and climate change problems, to a crunchy, yummy, mosquito patty?

“We thought it was just the Americans who are so glutinous and proud as to avoid eating the proper bug-based foods, but apparently the whole world is. You will pay for that when the Great Reset comes, of that I assure you!”

Trump responded to the bug saga by posting a picture of himself with an 18 oz ribeye, saying “Sorry losers and haters but beef is the best and you all know it! Cry and weep as you eat bugs while I devour a succulent steak and lobster tail!”