YIKES: Brandon Takes a Tumble and Not Found for Hours Because Life Alert Button Was Too Expensive Thanks to Inflation 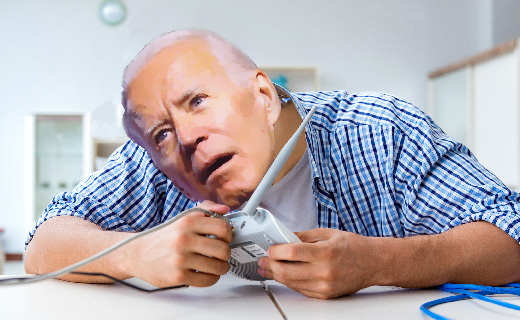 Things went from bad to worse for the Biden White House when, on Friday night, Biden took a fall down a long flight of stairs and, thanks to not having a life alert button on him, was not found for hours. His condition is, as of now, unclear. Kamala has attempted to seize power but, lacking popularity, has been stymied by the faction that Dr. Jill Biden is leading with the aid of Mayor Pete, who sees Biden’s favor as his sole path to power.

Power struggles in the court of Brandon aside, the story of what happened is quite interesting.

Apparently, Brandon was wandering off to the nuclear bunker underneath the White House. As there’s never anyone down there to bother him, the elderly president finds it a relaxing place to nap, eat lukewarm oatmeal, and enjoy hours of Matlock reruns. His staff knows that it’s where he wanders off to but let him think it’s a secret so that he’s out of their hair and not making embarrassing gaffes.

In any case, Brandon headed to the basement and, in his excitement, fell down the long flight of stairs leading from the White House proper to the nuclear bunker.

Because of the spot at which he landed, Biden couldn’t be seen on any of the security cameras when the staff checked to see where he was. The stairwell and bunker appeared empty, so the people who normally keep tabs on him when he watches his reruns (he insists on calling them “his programs”) in the basement figured he was somewhere else. They must have missed him entering the stairwell.

And so a broken Brandon was stuck at the bottom of the stairwell, unable to lift himself on the floor, drag himself toward an area that could be seen by a security camera, or effectively call for help (because of the likely attempts of those outside the bunker to get in and the need to keep those inside from opening the doors, the whole area is soundproofed).

Yet worse, the president had no “Life Alert” button because the cost of the buttons has jumped dramatically. The company blamed “Bidenflation” in a statement to us about the price increases, though that might have been just a rogue staffer cracking a joke after the tale of Brandon’s travails broke.

Biden was eventually found when Mayor Pete and 17 other men, all of whom had monkeypox, “wandered” down to the basement to “discuss alternate lifestyles and groundbreaking fitness tips.” Mayor Pete’s husband Chastin was not among those with the Transportation Secretary. After a quick “get to know you” session, they carried Biden to the top of the stairs where security could help him and then returned to their basement gathering.